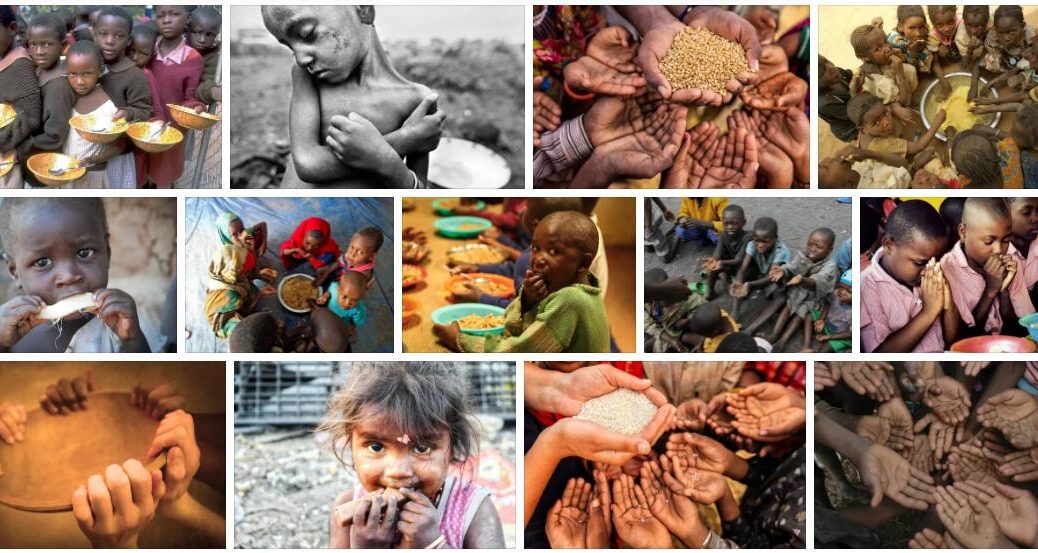 The hunger in question here means the situation in which a person is, for a prolonged period, in need of foods that provide him with the calories (energy) and the nutritional elements necessary for the life and health of his body. Nutrition experts differentiate between two types of hunger: global and partial.

The global hunger, also called hunger energy or calories, is understood as the inability of the daily food ration ingested by a person providing the equivalent calories of energy expended by the body in the work done.

In addition to calories, food must provide certain nutritional elements – such as proteins, vitamins and minerals – that fulfill the function of restoring the cells, tissues and organs of our entire body. The prolonged lack of any of these substances causes disturbances and injuries in the body, with serious health consequences. This is the so – called partial or specific hunger .

Brazil is the fifth country in the world in territorial extension, occupying half the area of ​​the South American continent. About 20 years ago, the supply of electricity and the number of paved roads increased, in addition to a huge industrial growth. None of this, however, served to combat poverty, malnutrition and endemic diseases.

In 1987, in Brazil, almost 40% of the population (50 million people) lived in extreme poverty. Today, a third of the population is malnourished, 9% of children die before reaching one year of life and 37% of the total are landless rural workers.

There is also the growing problem of the concentration of agricultural production, where a large part remains in the hands of a few people, seeing their assets increase appreciably and gaining great political power.

Production for the foreign market, aiming at the inflow of foreign exchange and the payment of foreign debt, has been growing, while the diversity of food production directed at the domestic market has decreased, remaining in a secondary position. In addition, millions of people live in slums, on the outskirts of large cities, such as São Paulo, Rio de Janeiro, Belo Horizonte, Porto Alegre, Recife, among others. The case of internal migration is a problem generated within the nation itself. A large part of the slum dwellers left land on their property or places where they planted their agricultural production. In large centers, these people will perform low-paid jobs, often in non-regular work. Almost the whole family works, including children, often throughout the day, and eats poorly, rarely ingesting enough to replenish spent energy. In this vicious circle, more and more families are flocking to the cities starving for not being able to provide for their livelihood.

It is common to say that population growth is responsible for the existence of hunger, as well as the adversities of climate and soil. Of course, for many people who have greater responsibility for the problem – although we all have it – it is a very comfortable position, which serves to hide the real causes.

A detailed analysis finds that hunger is a human creation. It exists and mistreats billions of people, the main ones being children. By organizing himself into society, man created inequality. On the one hand, a wealthy minority and on the other, the vast majority stripped of wealth.

Among the causes of hunger, the colonization process by Europeans, in America, Asia and Africa is the parent for the others. Upon arriving in these continents, they introduced their customs and profoundly changed the social organization of the natives. They explored their lands to the fullest. They implanted agricultural properties destined for export. All of this with the help of the slave labor of the natives.

With the imbalance generated by the colonizers, subsistence production fell and problems of malnutrition and hunger arose.

Problems arising from inadequate land use also play a role in explaining hunger. Underdeveloped countries generally have a colonial past. Within the current world economic order, most of these countries have not managed to get rid of the economic colonialism that still prevails in international relations. Its economies are structured to meet the needs of the foreign market to the detriment of the domestic market. More attention is given to agriculture to serve as an export than to serve the domestic market. In view of this, there is a shortage of basic foods for the domestic market or their price is so high that it makes it difficult for them to be purchased by a large part of the low-income population.

All these forms of malnutrition , when they do not directly make their victims, facilitate the appearance of other diseases, which end up leading the malnourished to death.

For example, the deaths of poor children in Third World countries do not point to hunger or malnutrition as the cause of these deaths. The causes are pneumonia, dehydration, tuberculosis, measles, etc. However, these and others are the result of a weakened or non-resistant organism, due to malnutrition or hunger.

The word Kwashiorkor comes from an African dialect on the Gold Coast (now Ghana) and has several meanings, the most used being that of “weaned child”. Kwashiorkor occurs in a child after his early weaning, that is, when a new child is born, in a period when there is another one still being breastfed, this gives way to the newborn. By ceasing to feed on breast milk and due to the poor availability of food that the family has as a result of its poverty, the child starts to have a diet low in protein.

Thus, Kwashiorkor is a disease caused by a lack of proteins and usually occurs in children over six months of age. It is characterized by: swelling of the belly, giving a puffy appearance; skin lesions; growth stop; mental retardation, sometimes irreversible; liver damage, with fatty degeneration; bleaching of hair; apathetic, sad, withdrawn behavior. Children with Kwashiorkor reach two or three years of age indifferent to the world around them. They do not crawl or walk, and generally die of diseases such as whooping cough, rubella, measles and others, which in a well-fed child rarely cause death.

Marasmus, another form of extreme malnutrition, caused by calorie deficiency in the child’s diet, usually occurs in the first weeks of life. It is characterized by weight loss, halting longitudinal growth and extreme weakness. The child weighs up to 60% less than normal.

There are also cases of mild and moderate malnutrition, called first and second degree respectively. They also have serious consequences for the health and development of human beings and undermine organic resistance, opening loopholes for the establishment of various diseases.

It was an undertaking to expand food production that consisted of the development of new lines of cereal plants. In Mexico, several new lines of wheat have been introduced, which has increased production six times in the past 20 years. These new strains were also introduced in India and there was a considerable increase in their cereal production. This, however, did not alleviate the problem of hunger, since at that same time the Hindu population was growing at the same rate as the production of cereals.

New methods of increasing food production are being studied. One is the cultivation of algae in large quantities as a source of animal feed. Another is to cultivate microorganisms (bacteria and yeasts) in hydrocarbons and inorganic nutrients, as a source of food for animals and people.

Another possibility would be the desalination of sea water for irrigation purposes in the desert. Experiments have shown that the desert, with its high temperature and abundant sunlight, can become quite productive for agriculture.

However, the introduction of these new food sources requires high technology and consequently a very high cost for most countries.